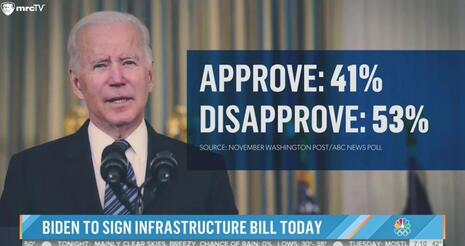 Happy New Year, NewsBusters readers. It is now officially 2022 and big things are ahead for the country. Given the bad polling for Democrats, as well as Joe Biden’s record low approval ratings, a looming abortion ruling from the Supreme Court, it could be a very depressing year for the left.

Let’s preview how the media will react to it all.

Right now, the chances of Democrats holding onto a tiny majority in the House and a 50/50 split in the Senate seem low. If the worst happens for the left on Tuesday, November 8, 2022, be sure to have your browser tuned to NewsBusters.org because we’ve seen this all before. On November 4, 2014, the Republicans picked up their largest majority in the House since the Great Depression and added nine Senate seats, the best for either party since 1980.

On election night 2014, NBC veteran Tom Brokaw denied reality, insisting, “I don’t think that this was a big, ideological election.” The ex-NBC Nightly News anchor grumbled, insisting that it was the GOP who needed to compromise. Not Obama: “Will [voters] fall out of love with Republicans that they have elected to office? That all depends on how the Republicans take control of the Senate now and the Congress.”

That same evening on election night 2014, Chuck Todd also denied reality: “It’s a good Republican night, but it’s not a wave.” Eventually, it got so bad that night Todd finally saw what was happening: “I think we’re bordering on calling this a wave election. You have an historic number in the House of Representatives.”

In 2021, Joe Biden became very unpopular. Biden ended the year in the low 40s. You may not have known just how bad it was for much of 2021 because the press hid his polling. As I wrote in October:

The last three months have been nightmarish for Joe Biden’s presidency. In August, his popularity started to plummet, dropping precipitously so that, by late October, some polls had him dipping into the high 30s as Afghanistan, inflation and an inability to accomplish his domestic agenda have altered a once popular president’s fortunes. But in comparison to Donald Trump, ABC, CBS and NBC had almost double the number of mentions of bad polling for the Republican.

If Biden stays unpopular in 2022, what will the networks do? Expect them to look the other way as terrible numbers come in for the Democratic incumbent.

Bad News for the Pro-Abortion Media?

In the fall of 2021, the Supreme Court heard a historic abortion challenge. Oral arguments indicate the Court may dismantle or overturn Roe v. Wade. If that happens, expect the liberal press to suffer a full-on meltdown. Back on December 2, 2021, the networks freaked out about the “ominous” tone from Court conservatives about the “gutting” of Roe. Ominous for whom?

2022 is going to be an interesting year with some potential bad news for the left. If that happens, expect an unhinged reaction from their allies in the media. Make sure you watch it all unfold here on NewsBusters.