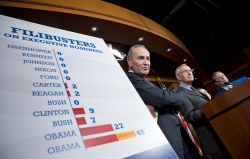 “You’ll regret this, and you may regret this a lot sooner than you think.” – Mitch McConnell on Nov. 21, 2013, in Senate floor speech to Harry Reid-led Democrats curtailing the filibuster for judicial appointments.
McConnell’s prediction came true, as he reminded Democrats in a 2019 New York Times op-ed, and it took only four years. “In 2017, we took the Reid precedent to its logical conclusion, covering all nominations up to and including the Supreme Court,” the Senate Republican leader wrote.
“So this is the legacy of the procedural avalanche Democrats set off: Justice Neil Gorsuch, Justice…