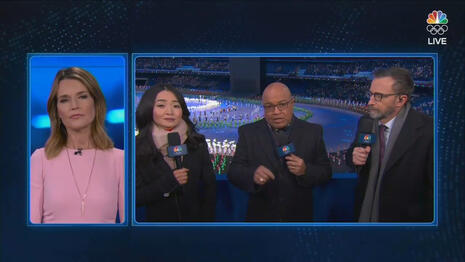 After NBC News’s morning and evening shows spent only 12 minutes, 22 seconds (in a year) on China’s horrific genocide of the Uyghurs, NBC actually managed to equal that coverage of the Uyghurs in just one night and morning of their Beijing Olympics coverage. So far, job well done on that front.

Beginning with NBC Sports’s Thursday primetime coverage (led by host Mike Tirico) and through NBC’s Today show Friday morning coverage of the Opening Ceremony, correspondents and panelists managed a total of 12 minutes and 40 seconds talking about the Uyghur crisis.

On February 2, Media Research Center President L. Brent Bozell called on NBC to “devote significant on-air reporting to telling the truth” about Communist China’s genocide against Uyghur Muslims, as well as the country’s “egregious response” to COVID-19 and other human rights outrages.

There was sober discussion of China’s “massive program of social engineering” of “forced assimilation,” “suppression of culture,” “forced labor” and “coercive birth control practices” against the Uyghurs.

It should be noted there was also the perfunctory passing along of the official Chinese line. Guest panelist and former The Wall Street Journal China editor Andy Browne dutifully noted: “It has to be said that the Chinese government emphatically denies all of this. They say that accusations of genocide are the ‘lie of the century.’”

The Uyghur situation became impossible to ignore once it was learned that an actual Uyghur athlete was tabbed to light the Olympic cauldron. Today co-host Savannah Guthrie relayed: “This moment is quite provocative. It’s a statement from the Chinese President Xi Jinping, to choose an athlete from the Uyghur minority. It is an in-your-face response to those western nations, including the U.S., who have called this Chinese treatment of that group genocide.”

There were other moments in the coverage that sounded like they were cribbed from a Chi-Com’s propaganda booklet. One particularly sickening moment came during Friday’s opening ceremony.

As little children in snowflake-decorated snowsuits danced in the center of the stadium, Today co-host Savannah Guthrie gushed that the imagery was “heavy with meaning.” To which guest panelist Yale professor Jing Tsu responded with a gross glossing over of China’s forced sterilization/abortion policies as she called it “beautiful, poignant, heartwarming,” adding: “For more than four decades, China had a one-child policy. Last year, the country had its lowest birthrate in five years. The country has always relied on its reservoir of human labor for its economic miracle but now continuous population growth is posing a challenge.”

SAVANNAH GUTHRIE: A return to the snowflake theme and from the choir to the videos to the performers, we’ve seen kids throughout this ceremony. Professor Jing Tsu, this is a choice that is heavy with meaning.

JING TSU, Yale Professor of East Asian Studies: Yes, this is certainly a beautiful, poignant, heartwarming, but also significant segment. For more than four decades, China had a one child policy. Last year, the country had its lowest birthrate in five years. The country has always relied on its reservoir of human labor for its economic miracle but now continuous population growth is posing a challenge. The government abolished one child policy in 2016 in hopes of reversing the trend. It is now encouraging families to have three children.

CHINA CAUSED THE GLOBAL PANDEMIC, BUT LOOK AT THEM BUILD UP LOCAL ECONOMIES

A few minutes before that performance, came another opportunity to pass along some propaganda about China “building up local economies” around the world. It ironically came during an “artistic portion of the program” devoted to the “images of a shared global struggle” against the “pandemic” — that was caused by a virus that originated in China!

GUTHRIE: And now, with the games officially open, we return to the artistic portion of the program, and this segment, the producers say, is meant as an homage to the people of the world. You’ll see as they walk, images of shared global struggle, particularly against the pandemic. I turn to Andy Browne here, former China editor for the Wall Street Journal. The pandemic is really the backdrop that complicates the image China is trying to send to the world.

BROWNE: Yeah, it’s worth remembering that while western countries may be boycotting these Olympics over human rights issues, China styles itself as a champion of the developing world, and it has plenty of support in countries from Africa to Latin America where its investments are building up local economies.

All-in-all NBC News and NBC Sports deserve credit for not completely shying away from the Uyghur genocide in the same way ABC and CBS have.

The following are some more of the relevant exchanges during NBC Sports’s February 3 live primetime coverage and the February 4 edition of NBC’s Today show.

HOST MIKE TIRICO: A primary issue, the U.S. government and human rights organizations have declared China’s treatment of the Muslim Uyghur population in the northwest region of Xinjiang as genocide. The U.S. estimates more than 1 million members of the Uyghurs and other ethnic minority groups have been detained, abused, and subjected to forced labor at internment camps. China calls these “lies” and says the camps are for, quote, “vocational education and training and are necessary to counter religious extremism and domestic terrorism.”

But there are other concerns that have also contributed to this latest flash point between the U.S. and China, including escalation of crackdowns on pro-democracy sentiments and protests in Hong Kong.

According to the U.S. State Department, China is using coercion and aggression to systematically erode autonomy in Hong Kong, undercut democracy in Taiwan, abuse human rights in Xinjiang and Tibet and assert maritime claims in the South China sea that violate international law. China considers those domestic matters, with Chinese leader Xi Jinping recently telling president Biden that China does not approve of interfering in other countries’ internal affairs through human rights issues.

Then in November, Peng Shuai, a Chinese tennis star and three-time Olympian, disappeared from public view for weeks. After her social media account contained allegations of sexual coercion by a former high-ranking politician in Chinese ruling communist party who also managed Beijing’s bid for the 2022 games. The ioc says it has kept in regular touch with Peng since participating in an initial video call aiming to establish her well-being. But critics counter it did not prove she was able to speak freely, and accused the IOC of aiding a cover-up.

On December 6th, the United States declared a diplomatic boycott of these Winter Olympics, citing human rights abuses by China. The U.S. one of several countries to announce it will not send any high-ranking government officials to Beijing for the games. And with the omicron wave looming over these games, the Biden administration has called out China for a lack of transparency over the origins of the covid-19 pandemic, even as it locks down cities and Olympic participants in a hardline pursuit of reaching zero COVID cases.

MIKE TIRICO: Let’s discuss human rights. There’s a clear difference central to the diplomatic boycott for the U.S. of these games along with other nations like the United Kingdom, and Canada and Australia, pointing to the treatment of the Muslim Uyghur population in Xinjiang and they’ve said that is genocide. Just give us a little bit more of an understanding of that area of the world. Why is that region so problematic for China to deal with?

ANDY BROWNE, Editorial Director of Bloomberg New Economy, former China editor for The Wall Street Journal: You know, this is obviously the most sensitive, the most complex, contentious issue at these Olympics. Xinjiang shatters this very carefully constructed image that China presents to the world of ethnic diversity. 56 ethnic groups all living happily together as one big happy family.

TIRICO: It’s 56 ethnic groups. However, 55 have a very small percentage. One, Han Chinese is well over 90 percent.

BROWNE: Exactly, exactly. And this is the point. That in Xinjiang, what they’re actually trying to do is to suppress ethnic diversity and assimilate the Muslim Uyghurs with the Chinese mainstream. It’s an enormous, massive program of social engineering.

TIRICO: Andy, you use the term social engineering. What does that entail?

BROWNE: We’re talking about forced assimilation. We’re talking about the suppression of culture. And of ethnicity. This is what the human rights groups are alleging is going on in these camps. And they talk about all kinds of human rights abuses. Forced labor, coercive birth control practices. They talk about indoctrination. And there’s a lot of evidence that this is happening from survivors of these camps. Now, it’s also important to say that the Chinese government absolutely denies this is happening. They say these camps, if they did exist – vocational training centers. They deny absolutely the accusation of genocide. Which they call the “lie of the century.”

Here are the most relevant exchanges from Friday’s Today show coverage of the Opening Ceremony:

SAVANNAH GUTHRIE: And as I bring myself into this conversation, some have said that there’s a cloud over these Olympics, that China has come under fire globally because of policies and practices. In fact, the U.S. has issued a diplomatic boycott of these games, sending no officials here because of human rights. In particular, China’s treatment of the minority Uyghur population in the Xinjiang region. Andy, the U.S. has come right out and called it genocide.

ANDY BROWNE, Editorial Director of Bloomberg New Economy, former China editor for The Wall Street Journal: Savannah, this is obviously the most sensitive issue at the Olympics. Western governments, the White House, human rights groups allege that the Chinese government is engaged in a systematic repression of Muslim Uyghurs in Xinjiang. They allege that this is a massive program of social engineering aimed at suppressing Muslim Uyghur culture, language, tradition, identity. They allege a host of human rights abuses. Forced labor, coercive birth control practices, indoctrination and all this adds up to a form of cultural genocide. It has to be said that the Chinese government emphatically denies all of this. They say that accusations of genocide are the “lie of the century.”
…

TIRICO: And there is that handoff now. Zhao Jiawen born in 2001, the first ever Chinese athlete to qualify for the nordic combined in an Olympic winter games and Dinigeer Yilamujiang and that is the one of great significance here, cross-country skier born in 2001, competing in these games, and according to state media, Dinigeer is a member of the Uyghur minority. Of course, those are the people from the region in northwest China that has attracted so much attention in the conversation of human rights and that ethnic minority and comments from the United States government among others of genocide being committed against the Uyghurs. So, a very significant moment here.

GUTHRIE: Mike, this moment is quite provocative. It’s a statement from the Chinese president, Xi Jinping, to choose an athlete from the Uyghur minority. It is an in-your-face response to those western nations, including the U.S., who have called this Chinese treatment of that group genocide and diplomatically boycotted these games. There will be much discussion about this choice.