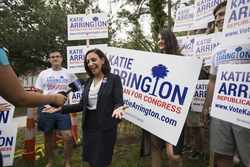 COLUMBIA, S.C. (AP) – Former President Donald Trump on Wednesday endorsed former South Carolina lawmaker Katie Arrington over first-term Rep. Nancy Mace in a GOP primary that tests his heft in the state.
In a statement, Trump called Arrington “a true Republican” with his “Complete and Total Endorsement” for South Carolina’s 1st Congressional District.
Trump called Mace – whom he endorsed in 2020, and who worked for his 2016 campaign – “an absolutely terrible candidate” whose “remarks and attitude have been devastating for her community, and not at all representative of the Republican Party to…