Donald Trump-obsessing journalists can’t help but notice some “cracks” in his “cult.” Sen. Mitch McConnell declared the January 6 riot was a “violent insurrection” and former Vice President Mike Pence proclaimed “Trump was wrong” about insisting Pence could overturn the Electoral College. One can question whether these statements are really “new,” since they echo in sentiment what these men said on the day of the riot.

McConnell was moved to repeat himself by strange language in a Republican National Committee statement suggesting the January 6 committee was persecuting “ordinary citizens engaged in legitimate political discourse.” Rioting is never legitimate political discourse. Republicans taking a stand against rioting shouldn’t be newsworthy. It should be routine if you want to be a law-and-order party. 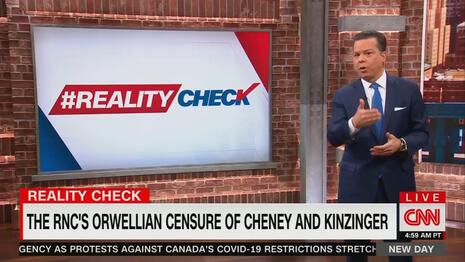 Journalists mangled all this. On February 7, CNN’s John Avlon suggested in his “Reality Check” commentary that Fox News aerobically avoided Pence’s speech. “This is big news but you wouldn’t have known it if you watch Fox,” he boldly asserted. “Because as CNN’s Oliver Darcy pointed out, transcripts showed that they totally ignored Pence’s statement on primetime Friday, all day Saturday. You’d have to wait some 36 hours to see the clip.”

This is wrong. Any search of Fox coverage shows that Martha MacCallum reported on it within minutes that afternoon. On Special Report, fill-in anchor Shannon Bream carried a report, complete with a clip of Pence. Bream also reported on the speech on her own show in the first hour of Saturday.

“Reality Check” was Pants On Fire.

Then Avlon had to double down with Soviet wisecracks: “It’s kind of like Pravda remaining silent on the fall of the Berlin Wall, hoping that nobody would notice.” This is sick stuff coming from CNN, which has played Pravda to the Soviets, the Cubans, the Nicaraguans, and even Saddam Hussein.

Like a good CNN employee, Avlon thinks Liz Cheney and Adam Kinzinger are the very best Republicans. He said the RNC statement “accuses Cheney and Kinzinger of trying to sabotage the GOP conference for trying to get the facts, which the RNC fears could jeopardize victory in November. So, investigating January 6th is recast as efforts to destroy Donald Trump.”

Earth to Avlon: This is not about fact-finding. Democrats are frank with reporters that the January 6 committee is about defeating Republicans in November. See Jonathan Lemire on MSNBC saying “There is a hope among Democrats…that the January 6 committee, which they soon hope to have prime-time hearings…will allow them to really paint Republicans as unfit for government.”

Cheney and Kinzinger were so anti-Trump that they joined Nancy Pelosi’s effort to defeat Republicans. But Avlon ranted that attacking them is “an Orwellian exercise designed to protect a cult-like cohesion around a party now committed to defending a lie. And that’s the real deal here, because the reason cults hunt down heretics is to try to make an example of them.”

Once again, this smack talk is strange coming from CNN, whose declining audience of fanatics wanted every dissenting conservative contributor like Rick Santorum dismissed from CNN, leaving only the occasional Kinzinger type to agree with everyone else.

One recent NBC News poll found 56 percent of Republicans now define themselves first as supporters of the Republican Party, compared to 36 percent who said they are supporters of Trump first. Trump’s appeal is fading with his backward-facing election denialism, and incessantly attacking Republicans as Trump cult members didn’t work in Virginia last year. Can CNN really handle the dissolution of their “cult” narrative? Or will they keep their hourly obsession with Trump in their fervent belief that it’s an electoral silver bullet for Democrats?