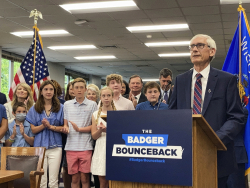 Wisconsin Gov. Tony Evers was in a familiar spot earlier this month when Republican legislators sent him a bill that would have banned anti-racist teachings in schools. For the 66th time since taking office in 2019, he pulled out his veto pen.
The rejection was the latest reminder of the crucial role Evers and a select group of fellow Democratic governors play in some of the most politically divided states. They are the only backstop against a wave of GOP-backed legislation targeting everything from abortion rights and school curricula to access to voting.
“I have to prevent some really bad…