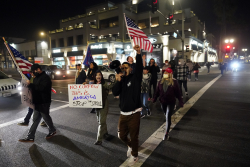 INDEPENDENCE, Missouri — The half-circle of 13 chairs that framed the statue of President Harry Truman in the heart of the historic Independence Square this past fall was placed there in the days after 13 American soldiers were killed in the attack on the airport in Kabul, Afghanistan, in late August.
The flags on either side of Truman flew at half-mast, with the chairs bearing the names of each service member lost in that attack. All hailed from small-town corners of our country. Their average age was 22. Eleven were Marines, one was a member of the Army, one a Navy medic.
Youth court…