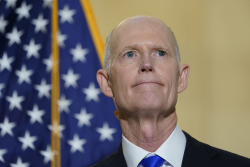 Mike Pence wouldn’t let it go, and when the incumbent Republican claimed again and again during the 2020 vice presidential debate that a Biden-Harris administration would make every part of the Green New Deal a reality, then-Sen. Kamala Harris replied, again and again, that wasn’t quite right.
It was true that the Biden-Harris campaign had called the Green New Deal a “crucial framework for meeting the climate challenges we face,” but as the California Democrat made clear to moderator Susan Page, their climate plan was not a carbon copy of what other Green New Deal advocates, such as Sen….