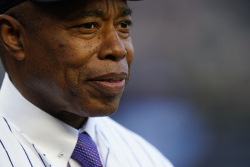 New York Mayor Eric Adams is a rising power in the Democratic Party. A former police captain, Adams is the answer to the prayers of Democrats who have almost given up praying for a politics they can sell nationally.
Adams is a Black man, who, at age 15, was arrested and beaten up by police. His response: “I didn’t say, ‘Woe is me.’ I said, ‘Why not me?'” So he joined the force and advanced through the ranks.
“I support my police,” he says, “but they can’t be abusive.”
Adams is at war with a far left that doesn’t do well against witty retorts. The local media characterizes his spats with…