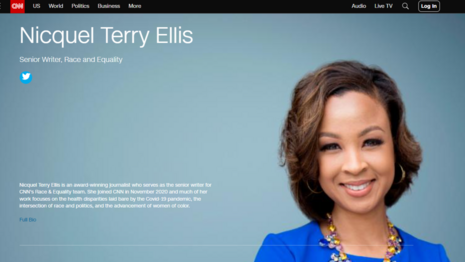 In his “Fourth Watch” newsletter on media on Thursday, former CNN staffer Steve Krakauer flagged a Wednesday story on CNN.com insisting “Some activists and Democratic lawmakers point to abortion bans as a form of White supremacy, which is a term to used to describe White people having dominance over people of other races and ethnicities.” It was right there in the headline:

‘Pushed to the margins’: Why some activists and lawmakers say abortion bans are a form of White supremacy

Nicquel Terry Ellis, a CNN “senior writer on race and equality,” concocted an article that was a parade of leftist activists and radical Democrats and included exactly zero pro-lifers. The star of the Ellis story has had six abortions.

(CNN)The first time Kenya Martin got an abortion, she was a 19-year-old college student who felt she wasn’t old enough or mature enough to raise a child.

The second time, Martin was a 26-year-old single mom making $12 an hour as a bank teller, could barely afford childcare or health insurance and was in a custody battle with her daughter’s father. Martin would later have four more abortions, each time knowing she did not want another child.

Now Martin, who is Black, worries that other women, particularly women of color, won’t have that choice if the Supreme Court affirms a leaked decision to overturn Roe v. Wade — the landmark ruling that legalized abortion in 1973.

Ellis quoted Rep. Ayanna Pressley of “the Squad” stating on the House floor that  “The anti-abortion movement in America is rooted in organized White supremacy, and overturning Roe v. Wade would only perpetuate cycles of poverty and trap our most vulnerable in systems of oppression.” She also quoted Monica Simpson of “SisterSong” claiming “this is a fight against white supremacy.”

Some activists say banning abortion will only exacerbate the economic struggles of Black and brown women https://t.co/bHxZ1lquhz

The CNN article plainly reports the estimate that black women get 38 percent of the abortions in America, which CNN apparently believes makes them the neediest population, that abortion is essential for “marginalized communities.” They can’t seem to acknowledge the notion that actual white supremacists would be happy to encourage black abortions, not oppose them.

PS: On CNN on Wednesday night, Vanderbilt professor Michael Eric Dyson also launched the idea that the pro-life argument and white supremacy were linked: “And when you tie it all together, white replacement theory, anti-CRT argument, the insistence that abortion be banned, and that White babies, in particular, be born? This is all of a larger piece. And that larger piece is the fear of Whiteness disappearing in the face of a worldwide global expansion of people of color.”

On CNN, Michael Eric Dyson says “the insistence that abortion be banned, and that White babies, in particular, be born? This is all of a larger piece. And that larger piece is the fear of Whiteness disappearing in the face of a worldwide global expansion of people of color.” pic.twitter.com/Eem7axRYky