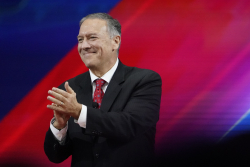 NASHVILLE, Tennessee-Someone in the convention center has a fatwa on his head. Not anyone attending the regional dance competition on the mezzanine level or the business expo down the hall, but the keynote speaker who is addressing the Faith and Freedom Coalition gala in the grand ballroom.
It is Mike Pompeo. And the Iranians want him gone.
In January, Iran’s president, Ebrahim Raisi, singled out the former secretary of state, demanding that Pompeo be tried under what’s called the Islamic law of retribution. Of course, even the Iranians know the United States would never extradite anyone, let…