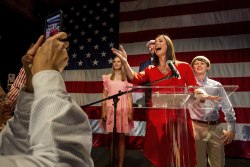 Getting into a messy, months-long public spat with former President Trump, it turns out, isn’t a winning strategy in the Republican stronghold of Alabama.
Rep. Mo Brooks, a conservative Republican whom Trump endorsed, then unendorsed last year, had been griping for days over Trump’s decision to endorse Katie Britt, his GOP rival for the Senate seat left open by six-term Sen. Richard Shelby’s retirement.
Meanwhile, Britt, a former top Shelby aide, kept her eye on the prize and her talking points trained on substance, including hitting the Biden administration on inflation, illegal immigration,…