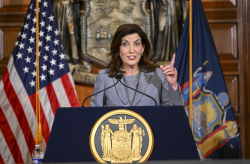 When a local reporter in Albany, New York, asked Gov. Kathy Hochul if she had “the numbers to show it’s the concealed carry permit holders that are committing crimes,” Hochul dismissed the question outright. “I don’t need to have numbers,” Hochul said. “I don’t need to have a data point to say this.”
The reporter, Anne McCloy, persisted and noted: “Somebody who is going to go do a mass shooting or something like that may not go and get a permit.” But Hochul said that was irrelevant to the issue of people carrying concealed handguns for protection.
The exchange must have caught Hochul off…