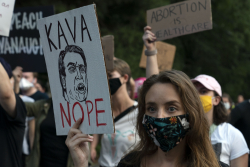 This is an election year. But the issues this year are not about Democrats and Republicans. The big issue is whether this nation has degenerated to a point of no return — a point where we risk destroying ourselves, before our enemies can destroy us.
If there is one moment that symbolized our degeneration, it was when an enraged mob gathered in front of the Supreme Court and a leader of the United States Senate shouted threats against Supreme Court Justice Brett Kavanaugh, saying “You won’t know what hit you!”
There have always been irresponsible demagogues. But there was once a time when…