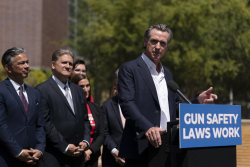 Gavin Newsom is campaigning for something. It’s likely he will run for president in 2024, but for now he insists on filling a void in the Democratic Party – he has anointed himself its fighter-in-chief.
From abortion to gun violence, the governor of California has lamented that Republicans have altered the battlefield while Democrats cling to old, outdated rules of engagement. “Where is my party?” an exasperated Newsom asked hours after the leak of the Supreme Court draft opinion that heralded the end of Roe v. Wade.
Newsom is disappointed in his party’s leaders, and he accused them of…